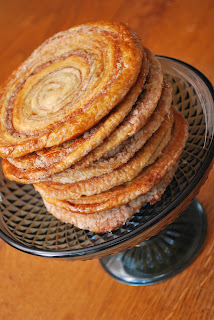 After last week, where I had actually seen the episode before baking, I'm back to my role of baking blind (oh, such a witty pun... no? Spoil sport.) 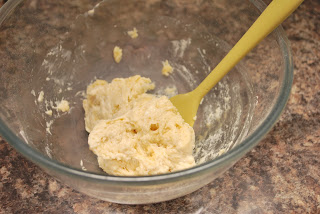 My lovely friends, who I usually watch Bake Off with, were away, so we saved viewing for their return. 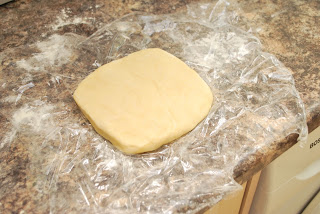 So, arlettes - had never heard of them, but now we've been introduced, I think we could be good friends. 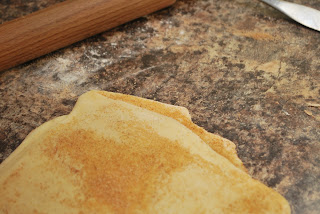 I had a little bit of a battle with the butter layer - I think it was too chilled, and it cracked and split, and refused to bond with the dough layer initially, but it turned out that this didn't really matter, a couple of book turns later and all was well. 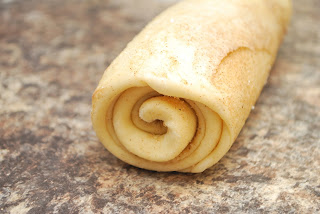 I don't think I rolled my biscuits out quite thin enough, but I could only fit 3 on a tray going in to the oven as it was. 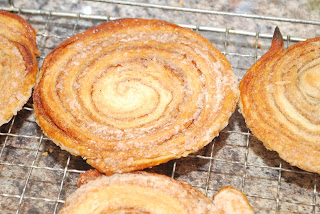 They are delicious and light and crispy, and although it is rather a palaver to make the special puff pastry from scratch, they were rather fun, and I would possibly repeat them. 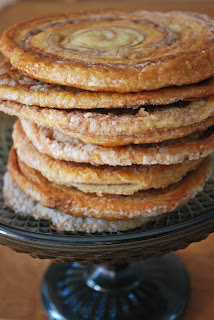 For the dough
60g/2¼oz strong white bread flour, plus extra for dusting
60g/2¼oz plain flour
1 tsp salt
40g/1½oz unsalted butter, melted
For the butter layer
125g/4½oz unsalted butter, at room temperature
25g/1oz strong white bread flour
25g/1oz plain flour
For the filling
50g/1¾oz granulated sugar
2 tsp ground cinnamon
icing sugar, for dusting
Preparation method
1. Put the flours, salt, butter and 50ml/2fl oz cold water in a bowl and gently mix to form a dough.
2. Transfer the dough to a lightly floured work surface and knead for 5 minutes until smooth. Shape the dough into a square, wrap in cling film and chill for an hour (or freeze for 20-30 minutes).
3. For the butter layer, cream the butter and flours together using an electric mixer. Sandwich the mixture between two sheets of cling film and roll out to a rectangle the same width as the square of dough, but twice as long. Chill in the fridge for 25 minutes.
4. Unwrap the chilled dough and butter layer. Place the chilled butter layer, short end facing towards you on a lightly floured surface and place the square of dough in the centre of the butter sheet. Make sure it is positioned neatly and covers almost to the edges. Lift the exposed butter sheet at the top and fold it down over the dough, then fold the exposed butter sheet at the bottom up over the top, so the dough is completely enclosed in the butter sheet.
5. Place the dough on a lightly floured surface, short end towards you. Roll out to a rectangle, keeping the edges as even as possible. Fold the top quarter down and the bottom quarter up so they meet neatly in the centre. Then fold the dough in half along the centre line. This is called a book turn. Wrap the dough in cling film and chill for 25 minutes.
6. Remove the dough from the fridge and make another book turn. Wrap the dough in cling film and chill for 25 minutes.
7. For the filling, mix the granulated sugar and the cinnamon together in a bowl. On a lightly floured surface roll out the pastry to a rectangle as before and sprinkle over the sugar.
8. Make another book turn to incorporate the sugar, then roll out the pastry 1cm/½in thick, to a rectangle 12x20cm/4½x8in. Roll up the pastry from the short end like a Swiss roll. Wrap in cling film and chill for 25 minutes.
9. Preheat the oven to 200C/180C Fan/Gas 6. Line 2 baking trays lines with silicon sheets or non-stick baking paper.
10. Trim the ends of the roll and cut into 8 x 1cm/½in thick slices. Dust the work surface heavily with icing sugar and roll each piece of dough out very thinly, turning to coat in the sugar and to prevent sticking. Place the biscuits on the prepared trays and bake for 5 minutes. Remove from the oven, carefully turn the biscuits and cook for a further 3-4 minutes, or until golden-brown. Transfer to a wire rack to cool.

I'm entering these into Great Bloggers Bake Off, which this week is hosted by: All You Need Is Love And Cake

Edited to add: I'm entering this in #CookBlogShare, which this week is being hosted by Kerry Cooks

Well done Becky, your Arlettes look so buttery and crisp and i have to say, better than a lot is aw on the show! thank you for linking up - see you next time for bread week x

Thanks Jenny, and don't worry! And looking forward to next week!

These look fabulous, I bet they taste great too x

Ohh see you dusted them with icing sugar after? That looks a lot nicer.
I've got to agree with you about them being delicious but such a palava, but yours do look very neat.

Did yours peel apart when you were rolling them out? My sugar layer just created a dry layer than kept trying to unravel??

Thank you Cathy and Mandi!

They are rather delicious, cinnamon and caramel, buttery goodness.

Mandi - I did the last roll in icing sugar and made sure they were thoroughly dusted before baking, but no dusting after baking.

The end slices did slightly unravel, but the rest were fine - I rolled over the sugar and cinnamon sprinkles to "embed" the filling in the pastry before the final book turn too.

Thank you Louise! What happened to your biscotti?

The more I see of these the more I want to eat them! But it looks so tricky and time consuming! Maybe I'll just have to bite the bullet and get baking! Yours look great! #CookBlogShare

Not too tricky, to be honest, and the time consuming is just that you have to be around - most of the time it is in the fridge, so you could get on with other stuff. Thank you!

These look really good Beckie! I love the picture of the dough rolled up before you cut them! I bet the kitchen smelled great. Hazel x