Ingredients:
1 large baking potato
1 large leek
100g of tasty cheese (I used a vintage Cheddar) -
About 600ml-1L of white sauce (I made mine up by eye, so can't tell you the exact amount, nor the exact ingredients, but a suggestion would be: 25g butter, 25g flour,
600ml milk)
1 tsp vegetable bouillon powder
Salt and pepper to taste

1. Wash the potato thoroughly (as you will be leaving the skin on). Slice the baking potato into half, and then into thin slices (about 0.25cm thick)
2. Wash the leeks to get rid of any grittiness, and slice thinly. If you're paranoid about grit like me, wash them again in a sieve.
3. Make a white sauce. I used the roux method: melt the butter in a small saucepan. Add the flour and bouillon powder. Stir until a paste forms (which is lump free). Add the milk *very* slowly - say 10ml at a time, stirring until all the milk is absorbed in between. Making a roux method white sauce is easy, but prone to lumps if you add the milk too quickly. Bring to the boil, then reduce to a simmer. Add the leeks and simmer for about 10 minutes. 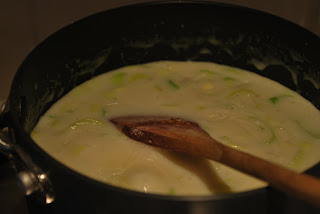 4. While the white sauce is simmering, grate 25g of cheese and set aside. Cut the rest into small 0.5cm dice.
5. Layer the half of the potatoes into the dish, and scatter over half of the diced cheese. 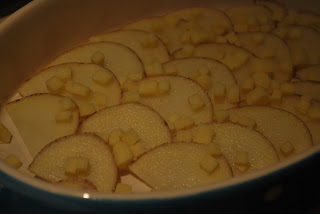 6. Pour over half of the white sauce with leeks. 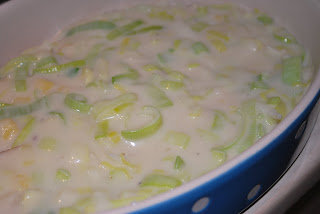 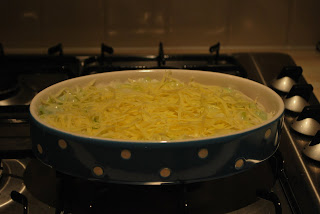 8. Put in the oven at about 160C for 50 minutes, or until the potatoes are soft and easily pierced by a knife and the cheese is browned and bubbling.
9. Consume! 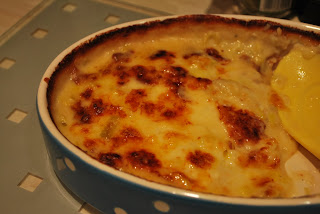