The Latest In A Long Line of Eccentrics

I was thinking today about how I am the latest in a long family line of eccentrics. My grandfather, for example, used to think that a double-barrelled shotgun down a mole-hill was a good mole-control technique. My grandmother sent my brother and I out with pickled onions to put down mole-hills, also to deter them. She also used to share around the chocolates whilst we watched television by clutching the box and throwing them at you like grenades during advert breaks. My parents are still alive so I shall not embarrass them by any details.

Today I had a half holiday. Instead of lounging around watching television (which would be tricky since I have no (working) television,) I picked rosehips to make rosehip syrup. Blame Wartime Farm for making me think of this!

I used the recipe from Home Preservation of Fruit and Vegetables, first published 1929, the copy I was using is the second impression of the thirteenth edition, from 1979. 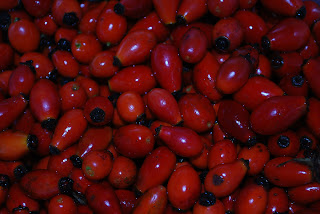 I like how rose hips look. Like red jewels.
The recipe below is half of what is actually documented in the book, as I only managed 1 lb of rose hips after 1 hours picking!

The following method is recommended if a syrup with a high vitamin C content is required. 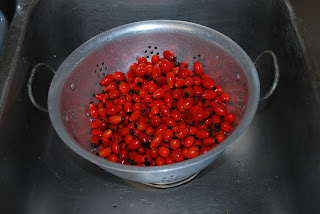 Extracting the juice
Have ready 1+1/2 pt boiling water, preferably in an aluminium (I wouldn't use aluminium pans personally due to possible health scares around these) or unchipped enamel pan. Mince the rose hips in a coarse mincer (I used a food processor/magimix), 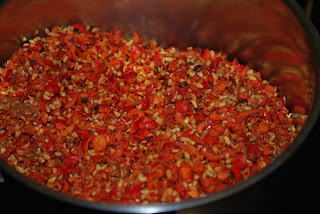 place them immediately in boiling water and bring this again to the boil. As soon as it re-boils remove the pan from the heat and leave it for 15 min, then pour into a scalded jelly bag and allow the bulk of the juice to drip through. Return the pulp to the saucepan, add 3/4 pt boiling water, re-boil and allow it to stand without further heating for another 10 min, then strain as before.

Adding the Sugar
Pour the juice into a clean saucepan, and boil it down until it measures about 3/4 pt, then add 1/2 lb sugar and boil for a further 5 min.

Bottling and Processing the Syrup
Pour the syrup while it is hot into clean, hot bottles and seal at once. (I put it into yogurt pots and freeze it and defrost what I need each time - once opened it only keeps for a week or two in the fridge)

Why don't you join me in my Land-Girl eccentricity?
Posted by Beckie at 18:52

Eccentricity is a seriously underrated quality of human kind. You enjoy yourself! What do you do with rose hip syrup other than dose small children with it?

It sounds ever so nice. What do you use it for? Drizzled over puddings, or as flavouring in cakes?

On reading the first paragraph of your post I had a vision of your grandfather shooting down a mole hill only to become covered with the debris of many pickled onions being blasted out of the earth. It made me smile.

Foggy and rbjaneite - I do enjoy being an eccentric! Rosehip syrup is delicious as an alternative to cordial. For tasty spoonfuls, stirred into yogurt. You think of it, you can use it!

The image of my grandfather doing just that is an excellent one I agree!

I have always wanted to make rosehip syrup...sounds like a lovely way to spend a day.

Do it! Super fun. Although dangerous picking in the wind... waving branches of thorns are unpredictable!