A couple of weeks ago, I went to stay with Lady Pink and Lord Fisherman. Since I was brought up never to arrive empty handed, I thought a home-baked gift would be in order. 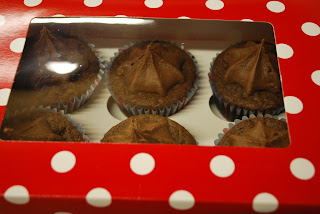 My local Sainsbury's sells these rather nice gift boxes, which make the whole transporting and giving of cupcakes that little bit easier. 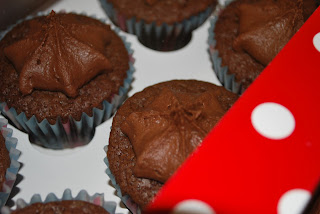 The recipe (below) is a modernised and metricated (is that a word?) version of a 1920s recipe. I originally found the recipe online sometime ago, but cannot find any longer. They were iced with chocolate fudge icing from Mr Oliver Peyton, using an icing gun supplied by the Mission Doctor as she headed off. It is my new favourite baking thing. Pretty icing swirls, minimal mess, and very quick. 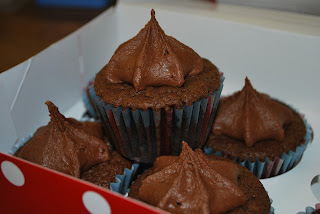 Ingredients for each part are listed under each part.

Cream the sugar, butter and the soda together. Beat in the egg yolks. Set aside.

Put the sugar, chocolate and half of the milk in a saucepan, set over a medium heat and bring to the boil. Take from the heat and add the rest of the milk.

Mix Part One and Part Two together and set aside.

Sift the flour, baking powder and salt together three times.

Bake at 160C for 20 minutes or until well risen and a toothpick inserted comes out clean. (The original recipe just said "bake in a medium oven")

Which cookbook did the recipe come from? I love old cook books, I'm discovering more and more of them. x