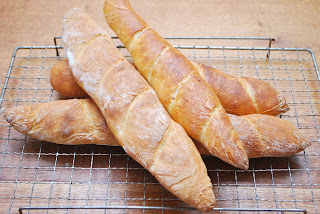 I love bread, so bread week is one of my favourites! I am continuing my baking of the technicals, and this week, it was baguettes. I was pleased with how these turned out, overall. 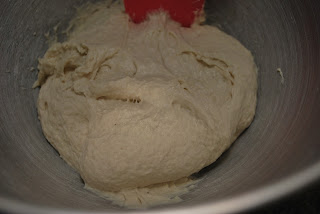 My sizing was a little off - these were sadly not four evenly sized baguettes. However, they had a wonderful crust, and a lovely open structure. I didn't have a proper razor to slash the baguettes, and none of my knives were sadly quite sharp enough. 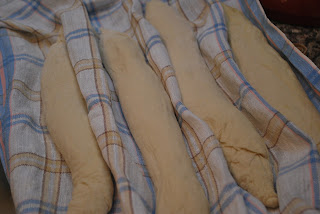 Two of the baguettes had a good sheen, but two didn't, and I'm not quite sure why. It may have been that I was switching between recipes (a very similar recipe is in Paul Hollywood's "How to Bake"), and one had me to knead in oil rather than flour, or it may have been to do with position in my (non-fan) oven. 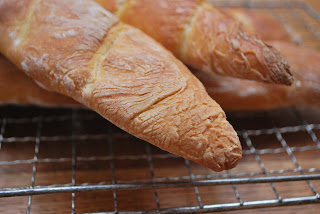 Recipe (From BBC Food)
Ingredients
olive oil, for greasing
500g/1lb 2oz strong white bread flour, plus extra for dusting
10g/¼ oz salt
10g/¼ oz fast-action yeast
370ml/13fl oz cool water
Method
1. Lightly oil a 2¼ litre/4 pint square plastic container with olive oil. (It’s important to use a square tub as it helps shape the dough.)
2. Put the flour, salt and yeast into the bowl of a freestanding mixer fitted with a dough hook (don’t put the salt directly on top of the yeast). Add three-quarters of the water and begin mixing on a slow speed. As the dough starts to come together, slowly add the remaining water, then continue to mix on a medium speed for 5-7 minutes, until you have a glossy, elastic dough.
3. Tip the dough into the prepared tub. Cover and leave for 1 hour, or until at least doubled in size.
4. Dredge a linen couche with flour and lightly dust the work surface with flour.
5. Carefully tip the dough onto the work surface. Rather than knocking it back, handle it gently so you can keep as much air in the dough as possible. (This helps to create the irregular, airy texture of a really good baguette.) The dough will be wet to the touch but still lively.
6. Divide the dough into 4 pieces. Shape each piece into an oblong by flattening the dough out slightly and folding the sides into the middle. Then roll each up into a sausage – the top should be smooth with the join running along the length of the base. Now, beginning in the middle, roll each sausage with your hands. Don’t force it out by pressing heavily. Concentrate on the backwards and forwards movement and gently use the weight of your arms to roll out the dough to 30cm/12in long.
7. Lay a baguette along the edge of the linen couche and pleat the couche up against the edge of the baguette. Place another baguette next to the pleat. Repeat the process until all 4 baguettes are lined up against each other with a pleat between each. Cover the baguettes with a clean tea towel and leave for 1 hour, or until the dough has at least doubled in size and springs back quickly if you prod it lightly with your finger.
8. Preheat the oven to 240C/220C Fan/Gas 9 and put a roasting tray in the bottom of the oven to heat up.
9. When the baguettes are risen, remove them from the couche and dust lightly with flour. Slash each one 4 times along its length on the diagonal, using a razor blade or a very sharp knife. Transfer to a large baking tray.
10. Fill the heated roasting tray with hot water, to create steam, and put the bread into the oven. Bake for 20-25 minutes, or until the baguettes are golden-brown and have a slight sheen. Cool on a wire rack.

I'm entering this in #GBBOBloggers2015, which this week is hosted by Jo's Kitchen.

I'm also entering this in #CookBlogShare, which this week is being hosted by Kerry Cooks

well done on tackling baguettes - no mean feat I am sure! (you were braver than me!)Yours look really nice - golden brown and def baguette like! thank you for linking up x x

Your baguettes look fantastic! Great shape and crust. I tried making baguettes and found the same issue when slashing the dough. Although I sharpened my knives with a steal I still found they weren't sharp enough.
Angela x

Thank you Jenny! I love the technical challenges, they bring out my competitive streak!

Aww, thank you Angela, I'm pretty proud of them :-)