I have a habit of becoming fixated on one thing for a while, obsessed, almost, before something new and exciting catches my attention. This month my obsession has been sourdough.

Ignoring all advice about new sourdough creators getting a culture from a friend, or not starting your own culture until you know enough about sourdough, I ploughed straight in. I used SourdoughHome a great deal, though I must admit, despite no experience in the issue, I still did a little experimentation. I started with very small proportions, and fed the culture up, over a week, so that I had to throw out less. 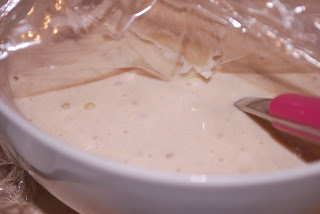 Turns out that sourdough is quite demanding. It needs feeding at least every 12 hours, a warm room, changing of the dish to avoid mould, and lots of love. (Okay, I made the last one up.)

But then, joy of joys, it was time to try it. 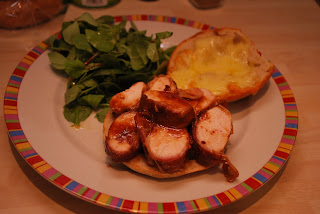 I grant you cannot really see the sourdough element of this meal. But that is a sourdough French Bread roll, topped with melted cheese, and chicken wrapped in bacon, marinated in barbeque sauce and oven cooked, with a side of Peashoots and Baby Leaves to make the ultimate chicken barbeque burger.

Then came sourdough chocolate cupcakes. These ended up a little drier than I intended, but I topped them with creamcheese icing (as used on Red Velvet Cakes) and they ended up alright. 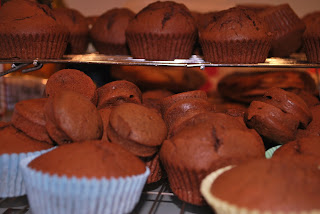 As an incidental point, I am a big fan of Asda pastel coloured cupcake cakes - unlike some baking cases I've used, they came out looking fresh, and the colour was not influenced despite the chocolate batter. And they are very good value (48p for 100)

There are two more sourdough adventures to document, but since this post is already too long, I shall post them another day.
Posted by Beckie at 14:02