Double *baked* is possibly a misnomer, as the first baking is in the microwave!

Prick the baking potato all over with a fork or other handy sharp implement, and microwave potato for around 8 minutes (for an 800W microwave)

Meanwhile, mix the creme fraiche, red pesto and cheese in a bowl

Remove potato from microwave, carefully scoop flesh from skin, leaving a border of flesh in the skin of around 1/4 - 1/2 cm. Put flesh into the bowl with the cheese mixture.

Mash the potato into the cheese mixture, until fairly smooth.

Put potato halves on a baking tray, bake in the oven at 230 C for around 10 minutes, or until the mixture is bubbled and browned.

Eat, with your choice of delicious accompaniments!
Posted by Beckie at 16:01 0 comments 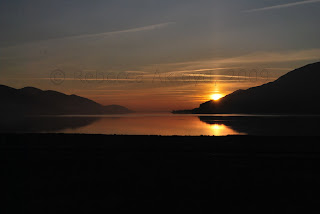 Before Christmas I had the wonderful privilege of going up to Fort William for a placement. This sunset across the waterfront at Caol reminded me of the wonder of creation, and the faithfullness of my Father God who wonderfully provided a loving church family for me, and gave me lovely new friends up in Caol.
Posted by Beckie at 12:28 0 comments 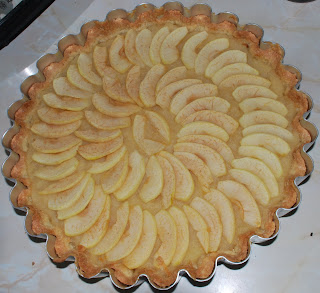 Pastry is a sweet shortcrust from Gary Rhodes "Sweet Dreams" - unusual in that it includes an egg and an egg yolk to make it even richer. He also advises using icing sugar for a nicer texture - I used about half and half of caster and icing sugars. I also dusted the pastry with icing sugar before baking it blind, which gave it a rather nice crispy sugary coated texture.

The filling is a slightly sweetened apple puree - three large bramley apples, peeled, cored and chopped into little pieces, sprinkled with 3 tablespoons of sugar then microwaved in a *large* bowl (watched like a hawk... otherwise it can get bubbly and tricksy and redecorate the inside of your microwave).

All topped off with fine slices of peeled and cored Cox apples (I used two medium sized ones) and finally baked in the oven for a few minutes.

If you wanted your apples a little more coloured you could sprinkle them with sugar or dot with butter before popping under the grill.
Posted by Beckie at 18:38 0 comments