God in the disappointments

Sometimes life is disappointing. The world seems to be against you. Sometimes you pray for something everyday, with the best motive in the world, with a view to honour God and to serve others, and yet it doesn't happen. It seems like God is just not there.

That's not to say the disappointment is any less disappointing, but it does provide a new perspective on them. To know that God cares so much for you, that He's willing to say "no".

I prayed for a job to stay in the city, so that I could continue to serve at my church, I could continue to be part of my small group, I could continue to share fellowship amongst friends and I could share God's Good News with those I have relationships with in the area. I wanted to serve Him, to stay with the people He so graciously gave me six and a half years ago. I pleaded, because I wanted to serve the people who kept me Christian during some really rocky times. He said "no". He is moving me to a different town. And He is at work, even in the most bitter of disappointments, to bring about something so much more exciting. Something that I don't know about, something I can't imagine, but something that will conform me to the image of His Son, so that I may be one of many brothers. And that's where God is in the disappointments.
Posted by Beckie at 20:54 0 comments

With the fruit of her hand she plants a vineyard... 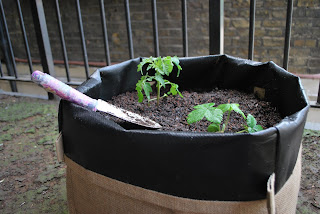 "From your lofty abode You water the mountains; the earth is satisfied with the fruit of Your work. You cause the grass to grow for the livestock and plants for man to cultivate, that he may bring forth food from the earth..." Psalm 104 v 13 & 14 (ESV)

Planter, organic top soil and seed compost, and Gardener's Delight tomato plant from Growing Concerns, strawberry from my mummy's back garden. Flowery gardening set a much valued present from an old housemate.
Posted by Beckie at 17:04 0 comments 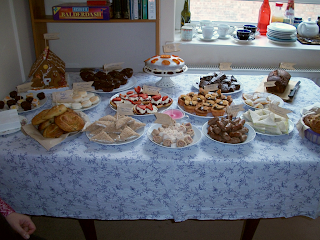 "This is mainly a fantasy as, in the real world, all the people you would like to get together for tea and cakes and plenty of undisturbed talking one afternoon are all far too busy. You are probably far too busy yourself.

Anyway, in this fantasy, all your favourite friends are gathered together, without a care in the world, all chatting away and eating delicious cakes and drinking tea. You'll have all your best crockery out and there'll be flowers on the table. No one will be on a diet or have a food allergy and no one will have to rush off. If there are any children in the party, they will be sweet and funny and behave beautifully and any babies will sleep peacefully, waking up occasionally to gurgle adorably for a few moments before snoozing off again." From - Tea with Mrs Simkins

Photo credit to Papa
Posted by Beckie at 20:19 0 comments