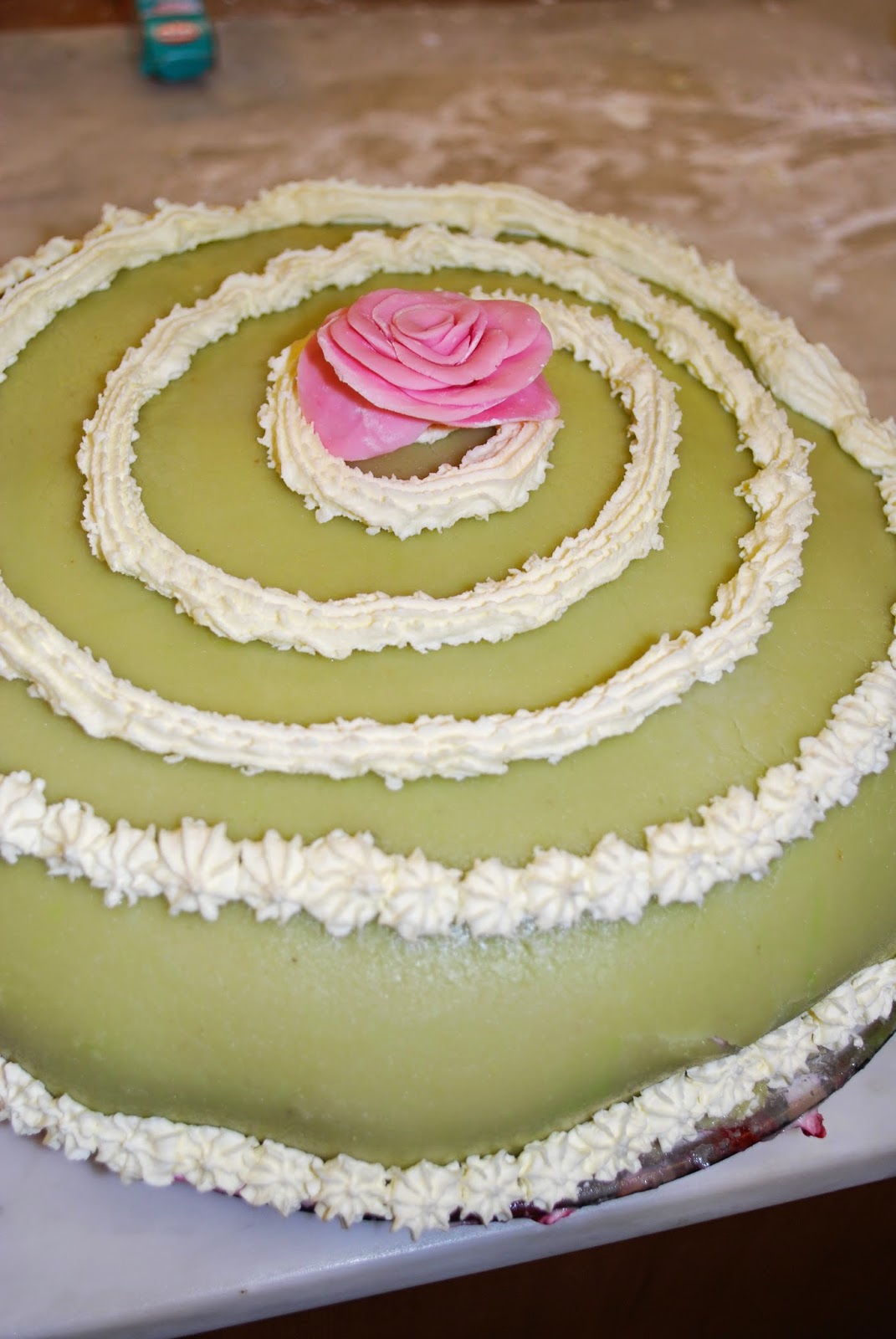 Okay. This was difficult. I mean, I know it's the technical bake, and it's meant to be a challenge, but I thought tiramisu cake was bad enough. 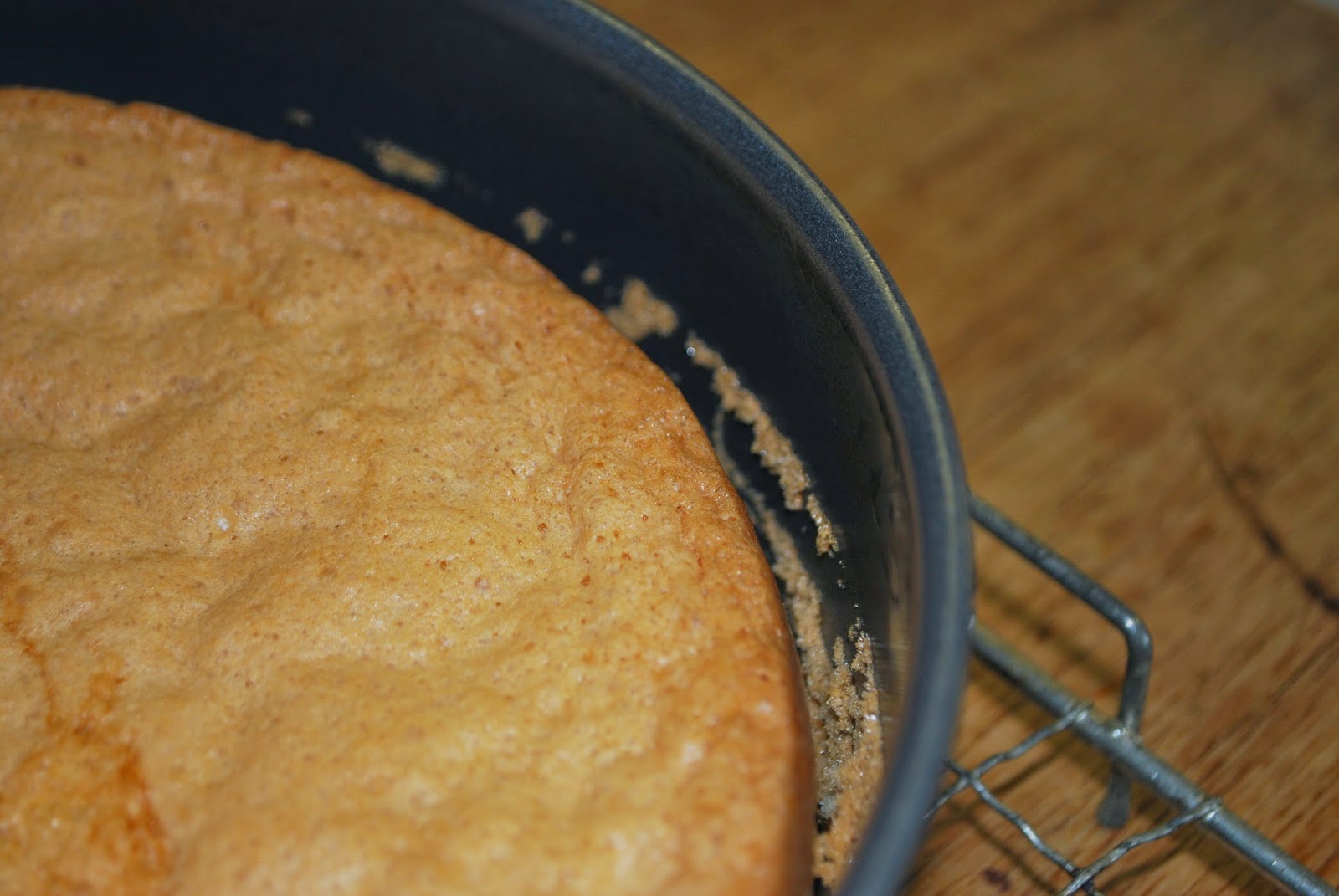 This had it all. Custard, genoese sponge, slicing sponges horizontally, jam, oozes, explosions and making your own marzipan. 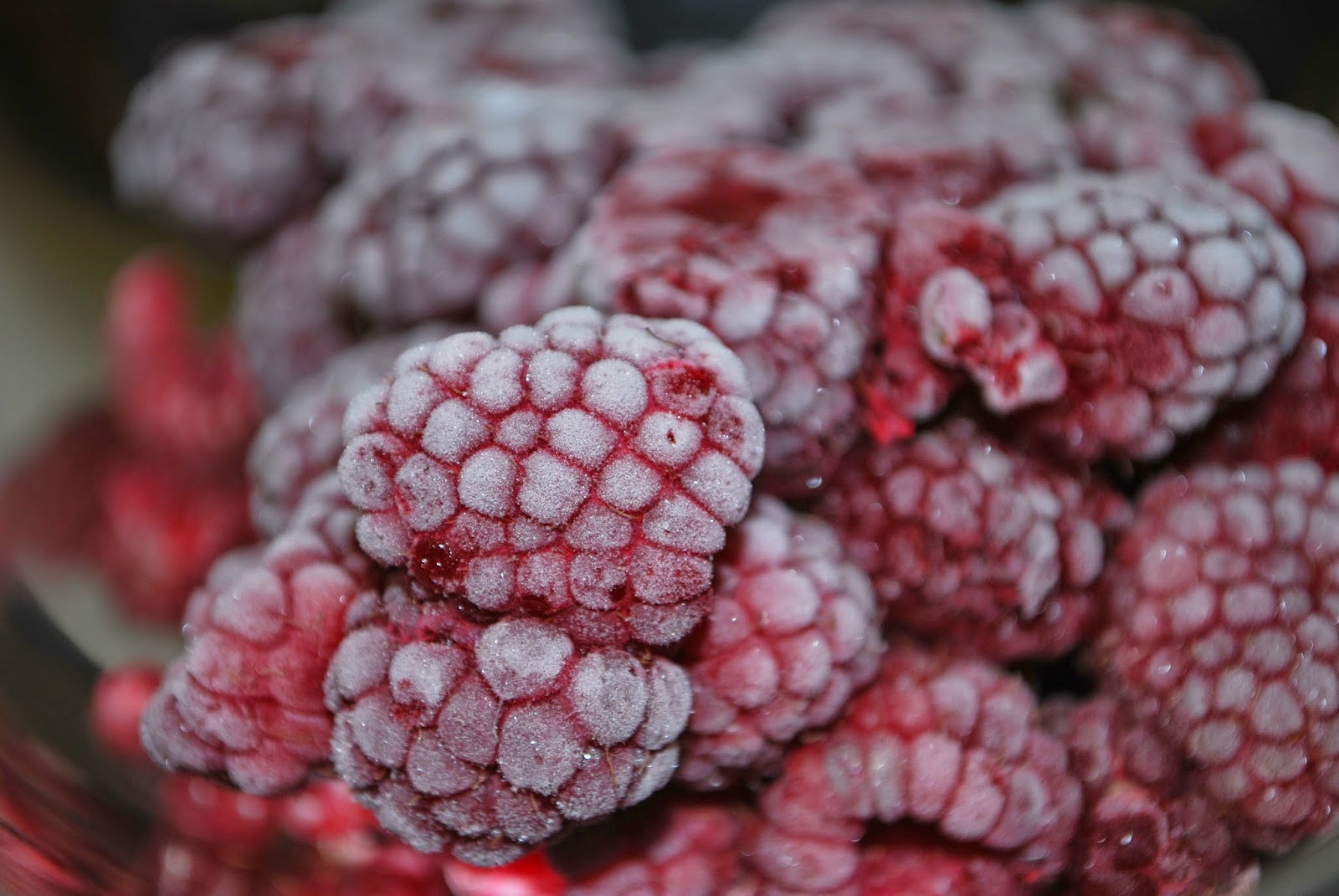 And, if done properly, it needs a dozen eggs.Which, in my opinion, is a lot of eggs for one cake. 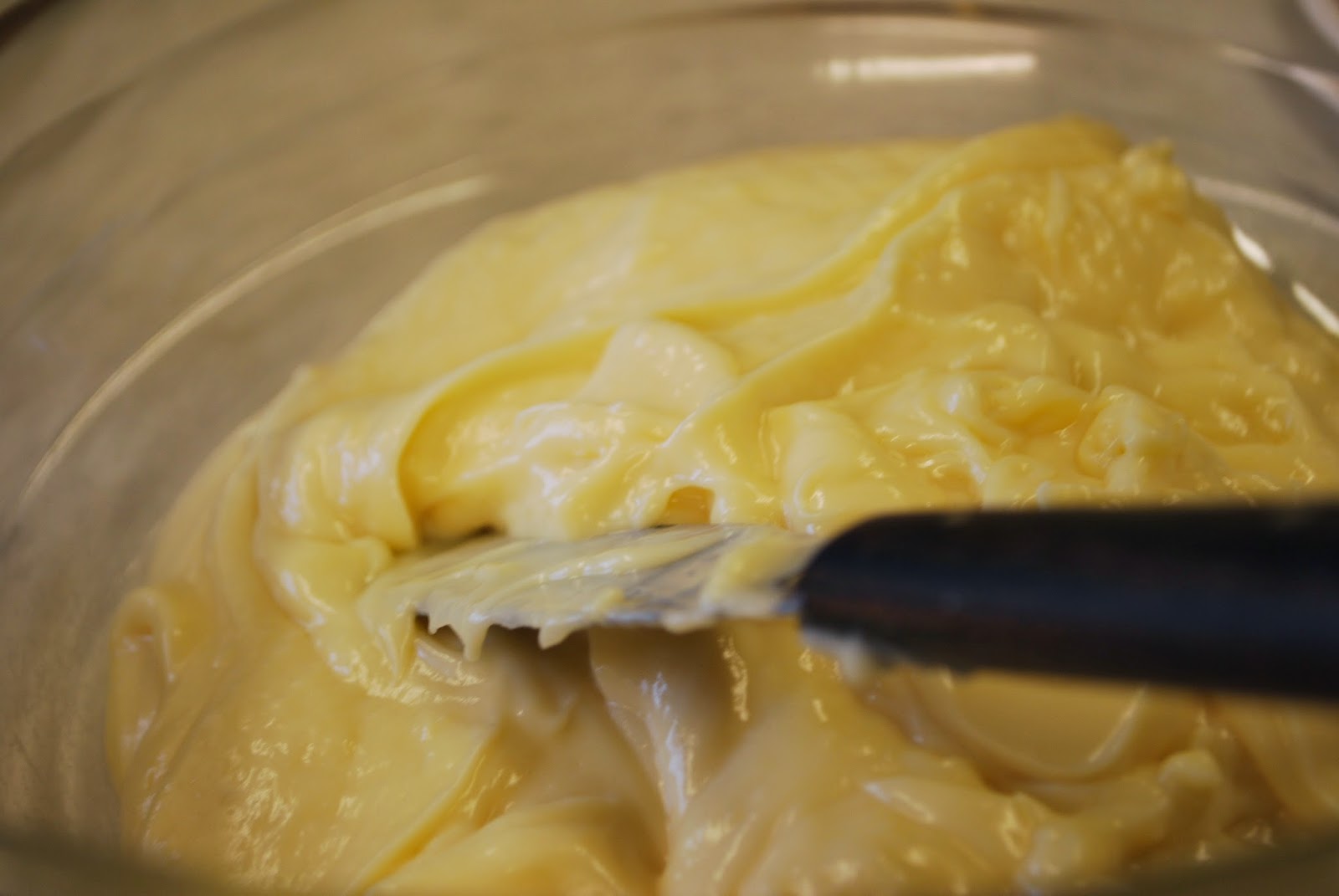 I didn't want to use raw eggs in my marzipan, as I will be serving this to a mixed crowd, and feel a bit twitchy serving other people raw eggs. So I still made my own marzipan, but I replaced the egg with simple syrup (actually it was the leftover syrup from poaching the pears for last week's technical!) 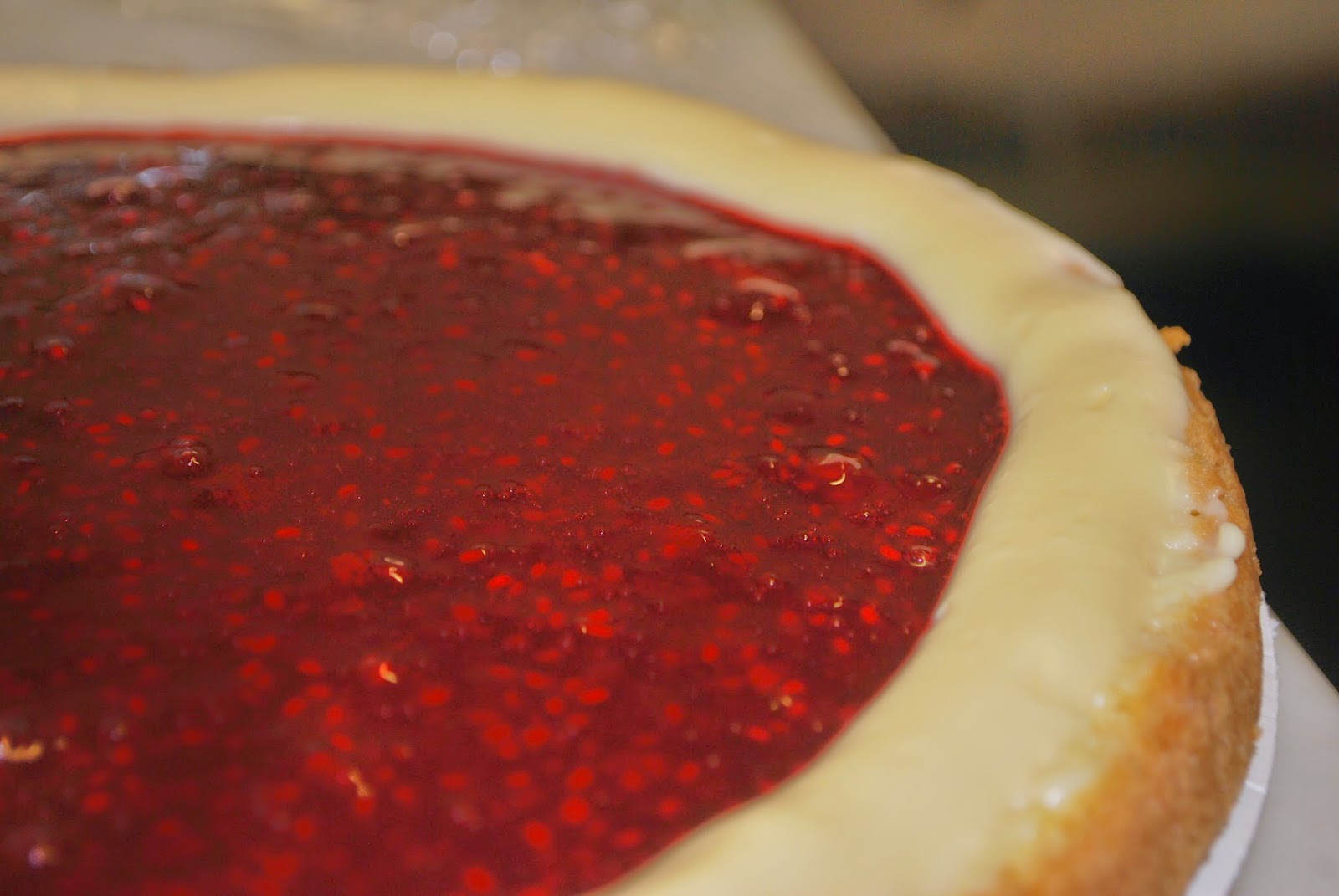 So, yes, disasters. My custard piping that was meant to contain the jam failed and all of a sudden there was jam spewing out of the sides of my cake like an over enthusiastic episode of ER, only without George Clooney to mop it all up.

The marzipan was a little overdone in the food processor and started spewing more oil than a certain petroleum company's tankers. And it crumbled. Badly. The pictures kindly don't the massive crack at the back! It was definitely not dome shaped. And the shade of green colouring I picked made it closely resemble something from a 1970s Good Homes magazine.

Still, as they say, it's not the winning but the taking part. And I certainly took part. I think I'll be scraping cream, custard and jam out of my fridge for a while yet. 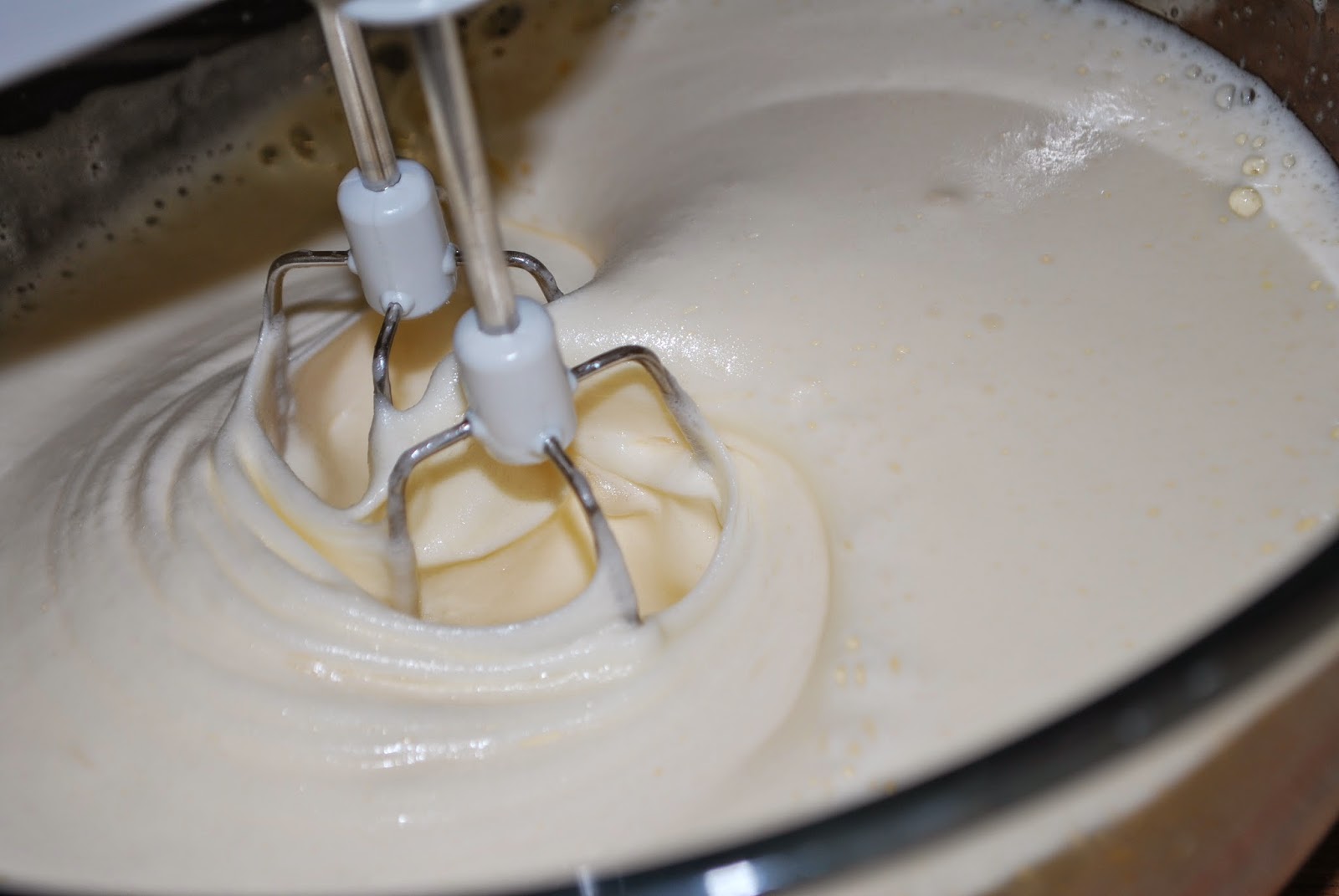 Prinsesstårta
(Recipe from BBC food)
For the vanilla custard
600ml/20fl oz milk
1 vanilla pod, split in half lengthways and seeded scraped out (I used vanilla extract, and added it with the butter. I'm hoping, soon, a nice vanilla company will take pity on me and send me real pods to try. Hint hint)
6 free-range egg yolks
100g/3½oz caster sugar
50g/1¾oz cornflour
50g/1¾oz unsalted butter
For the jam
200g/7oz raspberries (personally I think this made FAR too much jam, which is why it all exploded out)
175g/6oz jam sugar
For the sponge
4 large free-range eggs
150g/5½oz caster sugar
75g/2½oz plain flour
1 tsp baking powder
50g/1¾oz butter, melted
For the fondant rose
25g/1oz pink ready-to-roll icing (WHAT?! After the death-stare when Enwezor dared not to make his own fondant, this recipe has ready-to-roll?! And it's one of Mary's. I'm a little shocked. Although, also a little grateful, because that may have been the straw that broke my cake)
icing sugar, for dusting
To decorate
750ml/10 pints double cream
50g/1¾oz dark chocolate (36% cocoa solids), melted
For the marzipan
400g/14oz ground almonds
150g/5½oz caster sugar
250g/9oz icing sugar, plus extra for dusting
2 medium free-range eggs, beaten
1 tsp almond extract
green food colouring paste (do not use liquid food colouring)
(As I say, I didn't follow this recipe. I loosely used this one: Smitten Kitchen's Marzipan with more syrup, it was still rather crumbly)

Preparation method
1. For the vanilla custard, pour the milk into a pan with the vanilla seeds and vanilla pod and place over a low heat until just simmering. Remove from the heat.
2. In a large bowl, whisk the egg yolks, sugar and cornflour together until pale and creamy.
3. Remove the vanilla pod from the warm milk. (You can rinse this off to use in making vanilla sugar.)
4. Stir the warm milk slowly into the egg mixture. Pour the mixture back into the pan and cook over a low heat for 4-5 minutes, whisking, until the mixture thickens. (It should be very thick (think, nearing stiff peaks, it will be longer than 5 minutes, mine took nearer 10).)
5. Remove from the heat and beat in the butter until melted and incorporated (If not using vanilla pod, and using vanilla extract, add that now). Transfer to a bowl, cover the surface with clingfilm to prevent a skin forming and leave to cool. Set aside to chill in the fridge.
6. For the jam, tip the raspberries into a deep saucepan with the sugar and two tablespoons of water. Cook gently over a low heat, stirring occasionally, until the sugar is dissolved. Bring the mixture to the boil and boil vigorously for about four minutes, or until the temperature reaches 104C/219F on a sugar thermometer. Transfer to a heatproof bowl and leave to cool completely.
7. For the sponge, preheat the oven to 180C/160C(fan)/Gas 4. Grease and line the base of a 23cm/9in springform tin with baking parchment.
8. Put the eggs and sugar into a large bowl and using an electric mixer, whisk together until the mixture is very pale and thick and the whisk leaves a trail on the surface when lifted. This will take about five minutes.
9. Sift the cornflour, flour and baking powder over the egg mixture and carefully fold in using a large metal spoon. Fold in the melted butter, taking care not to over mix (don't add the butter with the flour to avoid overmixing, as you'll end up with lumps of roux in your eggs, but you don't need to wait until the flour is completely combined before adding the butter).
10. Pour the mixture into the lined tin and bake for 25-30 minutes until the sponge is golden-brown and has just started to shrink away from the sides of the tin. Remove from the oven and set aside to cool. When cool enough to handle, turn out on to a wire rack to cool completely.
11. For the fondant rose, roll 10 little pieces of fondant into small balls about the size of a cherry stone.
12. Dust two small pieces of greaseproof paper with icing sugar and one by one, place the balls of fondant between the sheets of greaseproof and flatten each ball out with your fingers, to a thin circle, approximately 2cm/1in in diameter. These form the petals. Roll the first petal up like a sausage to form a bud and wrap the remaining petals around the bud to make a rose. Bend and curl the edges of the petals, to make them look more realistic. Leave to dry for at least an hour.
13. To assemble the cake, using a serrated knife, cut the cake horizontally into three even layers. Place one of the sponges onto a serving plate. Spread a very thin layer of custard over the base of the first sponge.
14. Spoon a quarter of the custard into a piping bag fitted with a small plain nozzle and pipe a border around the edge of the sponge – this is to contain the jam (pipe a big fat border. Twice. It may still explode, but at least you tried).
15. Spoon the jam over the sponge, and spread evenly within the border (I didn't need to do any spreading, there was so much jam).
16. In a bowl, whip 600ml/20fl oz of the double cream (I would suggest using 650ml here and less later) to firm peaks. Fold half of the whipped cream into the remaining custard.
17. Spread one-third of the custard cream over the jam.
18. Place the second sponge on top and spread over the remaining custard cream.
19. Place the third sponge on top. Spoon over the remaining whipped cream covering the sides (the whipped cream is the best way of containing the jam - slap it over leaks and smooth over) and smoothing into a small dome shape on the top (ran out of cream). Set aside in the fridge for an hour.
20. For the marzipan, mix the ground almonds and sugars in a mixer fitted with a dough hook, before adding the eggs and almond extract.
23. Whip the remaining 150ml/5½fl oz  (I would suggest only using 100ml of cream here) of cream to medium peaks and spoon into a piping bag fitted with a small star nozzle. Pipe around the base of the cake.
24. Spoon the melted chocolate into a small paper piping bag. Snip off the end and pipe a swirl over the top of the cake (I had cream left over from the 150ml, so used this to top the cake instead). Top with the fondant rose.

As usual I am entering this in Mummy Mishaps Great Bloggers Bake Off 2014 and Supergolden Bakes GBBO Bake Along. 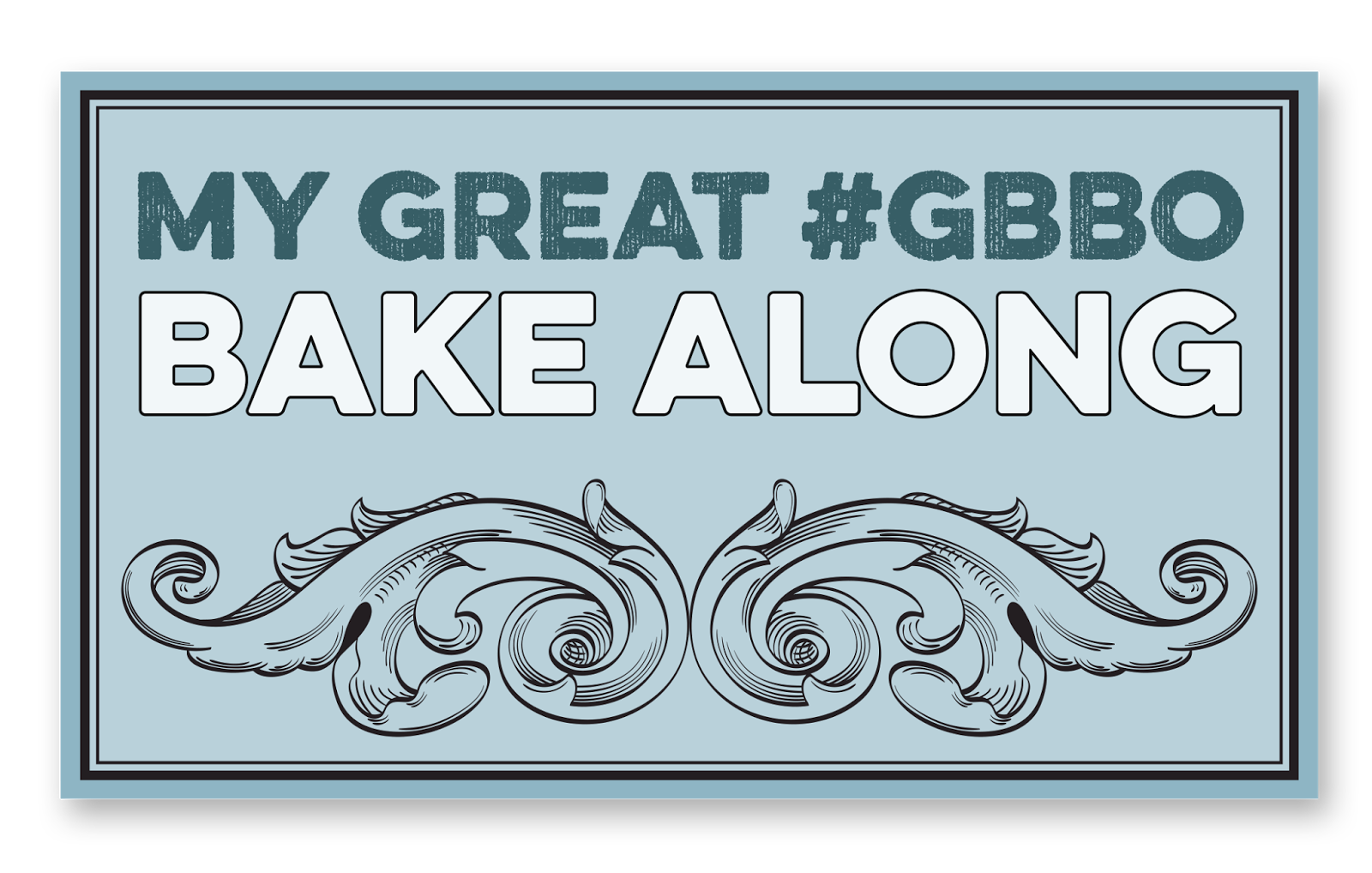 Not even brandy in it to drink afterwards... 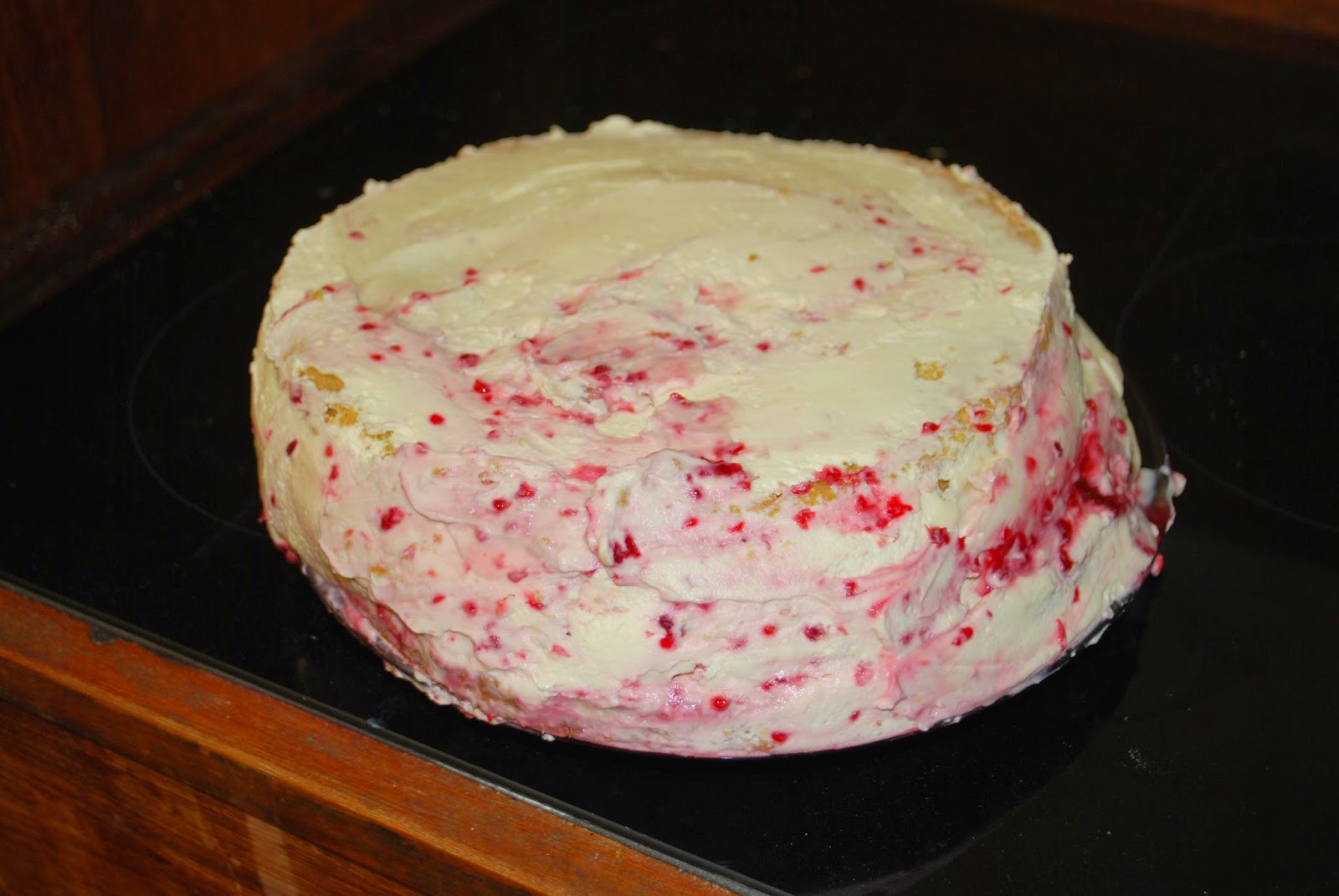 oh my goodness you are so brave attempting this cake!so much effort and time and i think you did marvellously for a first attempt. would you make it again?
thank you so much for the effort you put in x x

Aww, thanks! If I did make it again, I think I would "cheat" and buy the marzipan and jam, and I would probably make an "easier" cake - a plain sponge/Victoria sponge.

Considering your mishaps I think it's looks bloody fantastic! #greatbloggersbakeoff2014

Awww, thanks very much!

Well done on making everything from scratch! I made it but got the marzipan and jam from the shop, it was all just too much!

Thank you! You were definitely more sensible - next time I would definitely buy the marzipan, and probably the jam - or at least use a jar I'd made previously.