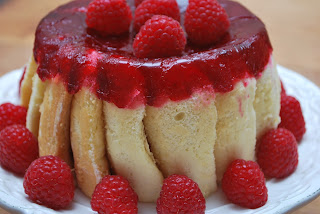 After last week's deviation from the technical bake, I've done it again! I'm afraid I lack a rectangular tin, and had no need in my life for a fruitcake with a tennis court on top. Sorry. 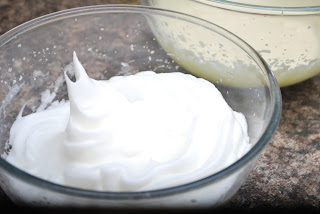 Charlotte Russe, however, sounded far more exciting, more stretching, and more likely to be educational. I was intrigued to note that none of the bakers used a traditional Charlotte mould (looks kind of like a squat metal flowerpot.) 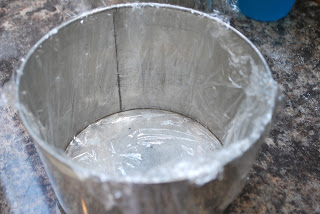 Having spent some time back in Practical Cookery, I was also amused to learn that apparently a Charlotte Russe has sponge fingers at the bottom of the mould (so they appear at the top of dish when it is turned out,) and is just a bavarois surrounded by sponge fingers. 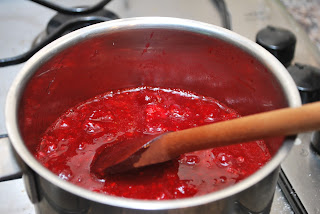 The inclusion of a 1/2cm layer of red jelly on top of the bavarois instead of sponge fingers instead is a Charlotte Moscovite. The creations featured on bake off didn't really fit either category! 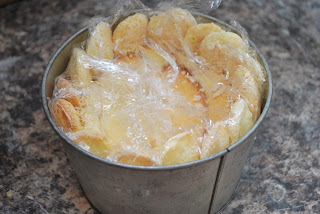 I, therefore, have made a Charlotte Moscovite - the jelly is raspberry and the bavarois is vanilla. 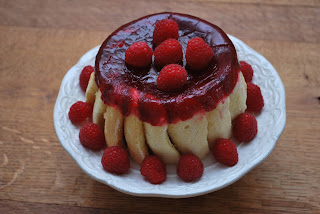 Recipe:
Jelly (adapted from here):
325g fresh or frozen raspberries
100ml cold water
2 heaped tablespoons caster sugar
7g gelatine
1. Put raspberries, water and sugar into a pan, heat gently, stirring until the sugar dissolves.
2. Bring to the boil, then simmer for 5 to 7 minutes, stirring occasionally to break up the raspberries and stop them sticking (do not blend them or the jelly will be cloudy).
3. Pour the raspberry pulp through a sieve into a jug, and leave to drain briefly. Top the juice up to 300ml, if necessary, with water.
4. Dissolve the gelatine in the juice, then pour the mixture into the base of a charlotte mould, lined with clingfilm, to a depth of about 5mm. Place into fridge and leave to set.
Sponge Fingers (From Practical Cookery by Ceserani and Kinton)
4 eggs, separated
100g caster sugar
100g plain flour
1. Cream the egg yolks and sugar in a bowl until creamy and almost white.
2. Whip the egg whites stiffly.
3. Add a little of the whites to the mixture and cut in.
4. Gradually add the sieved flour and remainder of the whites alternately, mixing as lightly as possible.
5. Place in a piping bag with 1cm plain tube and pipe in 8cm lengths on to baking sheets lined with silicone paper. (I actually piped mine into a lady finger mould tin that I inherited from my grandmother)
6. Sprinkle liberally with icing sugar. Rest for 5 minutes,
7. Bake in a moderate hot oven (200-220C) for approx 10 min.
8. Remove from oven and cool on a wire rack. Once cool, and once the jelly is set, line the charlotte mould edges with the sponge fingers.
Bavarois
10g gelatine
2 eggs, separated
50g caster sugar
250ml whole milk
125ml double cream
1 tsp vanilla essence
1. If using leaf gelatine, soak in cold water.
2. Cream the yolks and sugar in a bowl until almost white.
3. Whisk on the milk which has been brought to the boil and the vanilla essence, mix well.
4. Clean the milk saucepan which should be a thick-bottomed one, and return the mixture to it.
5. Return to a low heat and stir continuously with a wooden spoon until the mixture coats the back of a spoon. The mixture must not boil. (Interesting tip: If the custard goes too far and starts to scramble, it can be rescued: remove immediately from the heat and blitz with an immersion/handheld blender - this breaks up the protein chains, and restores the mixture to wonderful smoothness again. This may or may not be from experience.)
6. Remove from the heat, add the gelatine, stir until dissolved.
7. Pass the mixture through a fine strainer into a clean bowl, leave in a cool place, stirring occasionally until almost setting point.
8. Then fold in the lightly beaten cream.
9. Fold in the stiffly beaten whites. (This bavarois is not suitable for infants, the elderly, pregnant ladies, those with a weak immune system nor the paranoid)
10. Leave until the mixture is very nearly set, then pour into the charlotte mould.
11. Chill in the fridge until completely set.

I'm entering this in #GBBOBloggers2015, which this week is hosted by An Organised Mess

I'm also entering this in #CookBlogShare, which this week is hosted by Snap Happy Bakes

I must say I've never heard of either version of Charlotte! But they do sound delicious! I guess the flavours are a bit like a trifle? It does seem a bit faffy to make, but I bet once you've done it it is worth it! Love the sound of your flavours #CookBlogShare

i will try it at home

is it easy to make?

Well done for making this - with only a few hours spare this week I had to play it safe! I love the jelly on top - looks beautiful!

Wow, it looks fabulous and I bet it tastes just as good x

Hi Hayley - it was fantastic - the flavours are much better than a trifle - the sponge fingers aren't soggy and the bavarois has a delicious je ne sais quoi!

Sister, it is middle of the road - several places to trip up and quite long winded, but it is definitely worth the effort

Thanks Cathy - it was very well received, yes.

This looks fantastic- well done! It's so good to read the background too- I do love recipes which have been passed down through the ages- even if the name of this one is a point of discussion- it definitely looks delicious!

*claps hands* well done you on making not only this dessert but for making every component! it looks so pretty and i bet it tasted amazing well done xx

It looks fabulous, well done. I bet turning it out was a bit scary! What as it like inside? Bet it was pretty.

Thank you Debbie! I too love the background to recipes and old recipes - have you read "Great British Bakes" by Mary Ann Boermans? It's an excellent collection of British baking recipes through the centuries

Thank you so much Jenny. I feel pretty chuffed with it, and it did taste lovely.

Thank you Lucy. Turning it out was pretty nerve wracking - thankfully the clingfilm lining to the mould made it much easier, if not entirely in keeping with a Victorian method! Inside it is the vanilla bavarois which is kind of like a firmly set mousse or a creamy jelly, if you can imagine such a thing - the red jelly appeared on top of the white bavarois. I only realised when you commented that I forgot to post a picture of the inside!